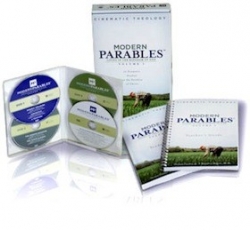 Modern Parables seeks to re-create the emotional immediacy that Jesus’ 1st-century audience felt when hearing the parables. It does this by using some of the best parable scholarship and exploring it through creative filmmaking. The gut-level understanding made possible by the films is intended to drive listeners into a deeper understanding of the Bible.

DVDs/Downloads can be purchased as a complete set or in sets of 2 lessons. The DVD/digital download includes everything you need to teach two lessons and a bonus lesson: the short film, an application video taught by Rev. Scotty Smith, a combined leader’s guide/study book, and a director’s commentary. The study can be used for Sunday School classes, small groups, youth groups, Christian schools, home schools, family study, and evangelism.

Lessons 1 & 2 in the series. Hidden Treasure is a light comedy about an unsuccessful real estate agent who finds oil in a field and must convince his wife they should sell all they own to buy it.

Lessons 3 & 4 in the series. Samaritan is a drama about a teenage boy who watches his father and youth leader pass by a hurt man, only to see the man helped by someone he didn’t expect to help him.

Lessons 5 & 6 in the series. The Shrewd Manager is an ironic comedy about a dishonest farm manager who is fired and so must think quickly to figure out a way into his next job.

Lessons 7 & 8 in the series. The Widow & Judge is a moving drama about a poor widow who struggles against a corrupt judge in her pursuit of justice.

Lessons 9 & 10 in the series. The Sower is a documentary about an 80-year-old wheat farmer who grows his crop from planting to harvest.

Lessons 11 & 12 in the series. Prodigal Sons is a drama about two sons trying to manipulate their father to achieve their own selfish ends.

These videos take Jesus' parable and show how they can apply even today. They have been a great way to expand conversations with our kids, they have started explaining the parables to their friends. I would recommend reading the parable before watching the video, as after the video there is a discussion portion that explains what Christ was trying to communicate.

Grade levels used
Do you recommend?
Yes
BC
Brandi Currier
Report this review Comments (0) | Was this review helpful to you? 0 0