Curricula Science in the Scientific Revolution

Science in the Scientific Revolution 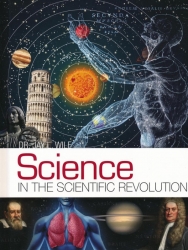 Science in the Scientific Revolution is the third book in a hands-on, multilevel elementary science series that introduces scientific concepts using history as its guide. It covers the scientific works of natural philosophers from 1543 to the end of the 1600s.

Because the course covers science as it was developed, it discusses a wide range of topics including astronomy, human anatomy, medicine, botany, zoology, heliocentrism, geocentrism, gases, pressure, electricity, fossils, microbiology, binary numbers, gravity, conservation laws, and the laws of motion. Throughout the course, the student learns that most of the great natural philosophers who lived during this time were devout Christians who were studying the world around them to learn more about the nature of God.

We completed this one and Science in the Ancient World and finished the second half of the first book all in one year and had two months left to start a third book from another author, only because this author's next book wasn't available yet. My son loves science and reads it on his own and then we go over the questions. We only did a few to the experiments, as my older child is special needs and needs much help. But it was easy for my younger student to read through the experiments and understand what was happening and expected. We completed those we were most interested in. Wish these were available when my high schooler was younger. I have heard he plans to write a total of 5. We can't wait for the others to come out.

Grade levels used
5
Pros
Well written. Easy to read and teach from and also easy to follow for an independent student.
Cons
None
Do you recommend?
Yes I do.
C
Candace
Report this review Comments (0) | Was this review helpful to you? 0 0